Climate Explained: How volcanoes influence climate and how their emissions compare to what we produce 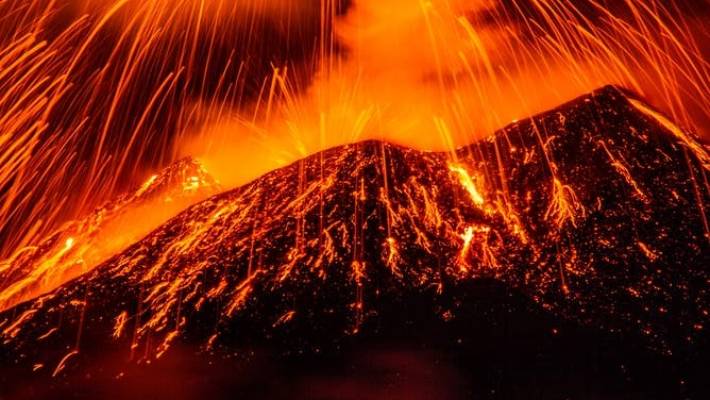 Climate Explained is a collaboration between The Conversation, Stuff and the New Zealand Science Media Centre to answer your questions about climate change.

Everyone is going on about reducing our carbon footprint, zero emissions, planting sustainable crops for biodiesel, etc. Is it true what the internet posts say that a volcano eruption for a few weeks will make all our efforts null and void?

The pretext to this question is understandable. The forces of nature are so powerful and operate at such a magnitude that human efforts to influence our planet may seem pointless.

If one volcanic eruption could alter our climate to such a degree that our world rapidly becomes an "icehouse" or a "hothouse", then perhaps our efforts to mitigate anthropogenic climate change are a waste of time?

To answer this question we need to examine how our atmosphere formed and what geological evidence there is for volcanically induced climate change. We also need to look at recent data comparing volcanic and human greenhouse gas emissions.

There is evidence for catastrophic climate change from very large, protracted volcanic eruptions in the geological record. But in more recent times we have learned that volcanic emissions can lead to shorter-term cooling and longer-term warming. And the killer-punch evidence is that human-induced greenhouse gas emissions far exceed those of volcanic activity, particularly since 1950.

Let's go back to first principles and look at where our atmosphere came from. Earth is 4.56 billion years old. The common consensus is that Earth's atmosphere results from three main processes:

1. Remnants of primordial solar nebula gases from the time of earliest planet formation

2. Outgassing of the Earth's interior from volcanic and related events

3. The production of oxygen from photosynthesis.

There have also been contributions over time from comets and asteroid collisions.  Of these processes, internal planetary degassing is the most important atmosphere-generating process, particularly during the first of four aeons of Earth's history, the hot Hadean.

Volcanic eruptions have contributed to this process ever since and provided the bulk of our atmosphere and, therefore, the climate within our atmosphere.

Next is the question of volcanic eruptions and their influence on climate. Earth's climate has changed over geological time. There have been periods of an ice-free "hothouse Earth". Some argue that sea levels were 200 to 400 metres higher than today and a significant proportion of Earth's continents were submerged beneath sea level.

At other times, during a "snowball Earth", our planet was covered in ice even at the equator.

The most famous such association is that of the eruption of volcanoes that produced the Siberian Traps. This is a large region of thick volcanic rock sequences, some 2.5 to 4 million square kilometres, in an area in Russia's eastern provinces. Rapid and voluminous volcanic eruptions around 252 million years ago released sufficient quantities of sulphate aerosols and carbon dioxide to trigger short-duration volcanic winters, and long-duration climate warming, over a period of tens of thousands of years.

The Siberian Trap eruptions were a causal factor in Earth's largest mass extinction event (at the end of the Permian period), when 96 per cent of Earth's marine species and 70 per cent of terrestrial life ceased to exist.

Geological evidence indicates that natural processes can indeed radically change Earth's climate. Most recently (in geological terms), over the past 100 million years ocean bottom waters have cooled, sea levels fallen and ice has advanced. Within this period there have also been spells of a hotter Earth, most likely caused by (natural) rapid releases in greenhouse gases.

Homo sapiens evolved during the past few million years largely during an ice age when up to two-kilometre-thick ice sheets covered large areas of the northern continents and sea levels were over 100 metres lower than today. This period ended 10,000 years ago when our modern interglacial warmer period began.

Astronomical cycles that lead to climate variations are well understood – for example, the Milankovitch cycles, which explain variations in Earth's orbit around the sun, and the periodic nodding/swaying of our Earth's axis. All of the geological and tectonic causes for this general longer-term Earth cooling are less well understood. Hypotheses include contributions from volcanoes and processes linked to the rise of the Himalayas and Tibet (from 55 million years ago).

Researchers have studied specific volcanic eruptions and climate change. Mount Pinatubo (Philippines) produced one of the larger eruptions of recent times in 1991, releasing 20 million tonnes of sulphur dioxide and ash particles into the stratosphere.

These larger eruptions reduce solar radiation reaching the Earth's surface, lower temperatures in the lower troposphere, and change atmospheric circulation patterns. In the case of Pinatubo, global tropospheric temperatures fell by up to 4°Celcius, but northern hemisphere winters warmed.

Volcanoes erupt a mix of gases, including greenhouse gases, aerosols and gases that can react with other atmospheric constituents. Atmospheric reactions with volcanic gases can rapidly produce substances such as sulphuric acid (and related sulphates) that act as aerosols, cooling the atmosphere.

These types of eruptions are thought to have been a partial cause for the Little Ice Age period, a global cooling event of about 0.5°C that lasted from the 15th to the late 19th century. Super volcanoes such as Yellowstone (USA), Toba (Indonesia) and Taupo (New Zealand) can, theoretically, produce very large-volume eruptions that have significant climate impacts, but there is uncertainty over how long these eruptions influence climate.

Perhaps the strongest evidence for answering whether our (human) emissions or volcanoes have a stronger influence on climate lies in the scale of greenhouse gas production. Since 2015, global anthropogenic carbon dioxide emissions have been around 35 to 37 billion tonnes per year. Annual volcanic CO₂ emissions are around 200 million tonnes.

In 2018, anthropogenic CO₂ emissions were 185 times higher than volcanic emissions. This is an astounding statistic and one of the factors persuading some geologists and natural scientists to propose a new geological epoch called the Anthropocene in recognition that humans are exceeding the impacts of many natural global processes, particularly since the 1950s.

There is evidence that volcanoes have strongly influenced climate on geological time scales, but, since 1950 in particular, it is Homo sapiens who has had by far the largest impact on climate. Let us not give up our CO₂ emission-reduction aspirations. Volcanoes may not save the day.