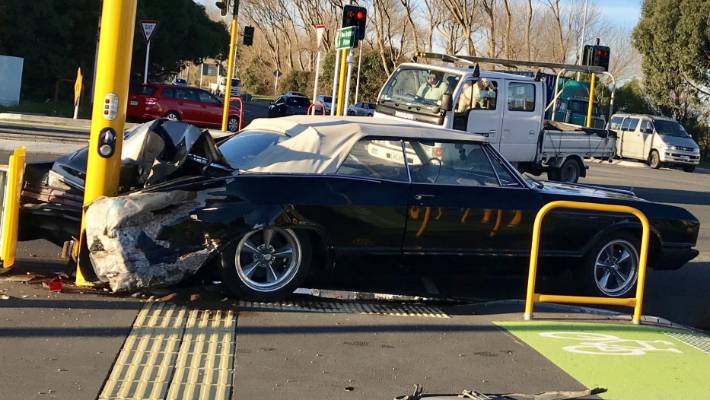 A Christchurch man whose classic car was written off after being hit by a police car hopes they now will pay his $15,000 insurance shortfall after admitting fault.

Danny Valentine was taking his "pride and joy" – a 1965 Convertible Buick Electra – out for the first time in five months on August 12 when a police car went through the intersection of Linwood Ave and Dyers Rd and crashed into the back right-hand side.

The Buick spun several times before crashing into a set of traffic lights. The car's boot was crushed and the fuel tank was ruptured by the impact.

Valentine was taken to Christchurch Hospital with minor injuries, but released hours later. The $39,000 car he bought four years ago was written off.

A police spokeswoman confirmed the crash investigation had found the officer driving the patrol car to be at fault.

The officer received a warning for careless use of a motor vehicle and the patrol car was written off also.

Christchurch metro area commander Superintendent Lane Todd earlier said the patrol car, which was using its lights and sirens, was responding to ambulance staff who had requested urgent assistance.

Valentine said he was sure the driver was "just doing his job" but wanted his car replaced.

[I] trust in what [police] are doing and this guy (the driver) just got it wrong on this day … he's still human."

He is yet to hear back on whether police will cover the estimated $15,000 in uninsured costs needed to replace the Buick.

Christchurch Transport Operations Centre (CTOC) real-time operations team leader Ray Young said the footage was not available as the camera had a fault at the time the crash happened.

The cameras, which can be used to pan all approaches of the intersection, were designed to record at all times but do "occasionally fail", he said.

Stuff also requested dash-cam footage from the patrol car, but was told by police cameras were not operating in the car at the time.

An employment investigation was also undertaken after the crash investigation, but the police spokeswoman would not disclose the outcome because it was an "employment matter".

"Police [are] in discussions with the classic car owner's insurer in terms of costs," she said.

"Road safety is a primary focus for police, and this crash – in which there were thankfully no injuries – has been a timely reminder for our teams in regards to urgent duty driving."

Police were involved in 4132 crashes over the last three years. A police officer was found to be at fault in 62 per cent of those crashes.

Replacements for vehicles written off between 2016 and 2018 cost police nearly $4.2 million. A further $10.1m was spent on repairs to vehicles which were salvageable.