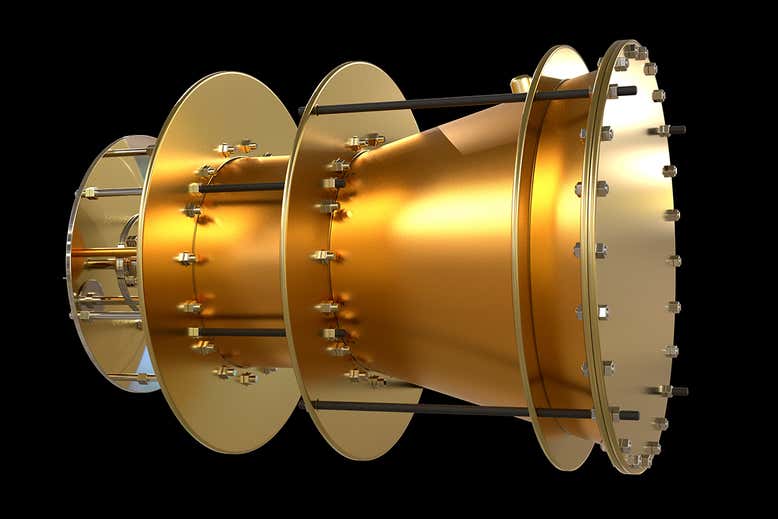 Star Trek's Montgomery Scott famously said "ye cannot change the laws of physics", but a real-life space engineer says he might have just done that.

David Burns of NASA's Marshall Space Flight Center in Alabama has unveiled what he's calling the 'helical engine', which could potentially power flights across space without using any fuel at all.

There's just one small problem - it breaks the laws of physics as we know them.

"I'm comfortable with throwing it out there," Burns told magazine New Scientist. "If someone says it doesn't work, I'll be the first to say it was worth a shot."

The simple version of how the helical engine works - or doesn't work - is like this: a ring inside a box is sprung in one direction, the box recoiling in the other, just as Isaac Newton's laws of motion say they should.

"When the ring reaches the end of the box, it will bounce backwards, and the box's recoil direction will switch too," New Scientist explains.

But if the box and ring are travelling near the speed of light, Albert Einstein's Theory of Relativity says as the ring approaches the front end of the box it will increase in mass because it's going faster than when it's going backwards - so it'll hit harder, resulting in forward momentum.

The actual engine itself will use a particle accelerator and ion particles, but that's the basic gist.

"Chemical, nuclear and electric propulsion systems produce thrust by accelerating and expelling propellants," Burns' paper reads. "Deep space travel is often a trade-off between thrust and large propellant storage tanks that eventually limit performance. The objective of this paper is to introduce and examine a unique engine that uses a closed-cycle propellant."

According to Burns it could produce a forward thrust up to 99 percent the speed of light without breaking Einstein's rules, but totally breaching Newton's third law of motion - that an action always has an opposite and equal reaction.

There are other hurdles to overcome too - it would have to be 200m long and 12m wide to work, and would only operate effectively in the frictionless environment of deep space.

Burns isn't worried if it turns out not to work at all, like others' attempts at fuel-free propulsion, such as the microwave-powered EM drive.

"I know that it risks being right up there with the EM drive and cold fusion," he told New Scientist.

"But you have to be prepared to be embarrassed. It is very difficult to invent something that is new under the sun and actually works."