A section of a Dunedin road is on track to retain its record of producing the most mobile speed camera tickets. And it is not a record police are pleased about. Shawn McAvinue reports.

More than 7600 speeding tickets were issued from the 10 sites in 18 months to the end of June. 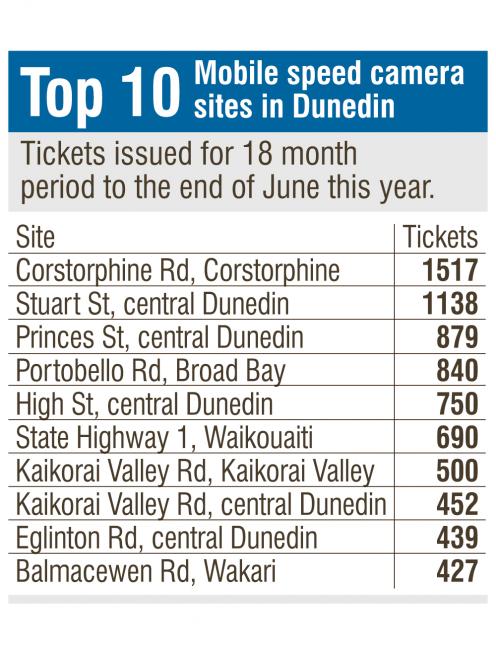 Almost 1100 tickets were issued from the site last year.

More than 420 speeding tickets were issued from the spot in the first six months of this year, keeping it in the top spot.

The only other spot to produce more than 1000 tickets last year was a section of Stuart St.

Another mobile speed camera site in High St is climbing the leaderboard.

Last year, its 487 speeding tickets earned it fifth placing on the list. There were 263 tickets from the same section of High St in the first six months of this year, which puts it second on the list behind Corstorphine Rd.

Police had approval to park a mobile speed camera on the section of Corstorphine Rd, uphill from Murray St.

The camera photographed motorists speeding on both sides of the road, he said.

Outside of holiday periods, the speed cameras had a10kmh tolerance, so a motorist had to be travelling atleast 61kmh in the 50kmh zone to be fined.

He could see no excuse for motorists speeding in the residential area, especially because Carisbrook School, Sara Cohen School and Richard Hudson Kindergarten were all nearby.

He would prefer that no tickets were issued from the site, as motorists would be travelling at safer speeds.

Police had approval to park a mobile speed camera in about 20 sites in the wider Dunedin area, he said. None of the revenue from fines went to police. It went straight to the Government’s consolidated fund.

A woman living in the section of Corstorphine Rd, who asked not to be named, said she welcomed police parking a mobile speed camera in her road. Motorists were frequently speeding past her home and she feared itwas only a matter of time before someone was seriously hurt in a crash.