Russia downplays threat to Ukraine in talks with US

Russia has told the US that it has no intention of invading Ukraine, after officials from both countries met for high-stakes talks in Geneva. 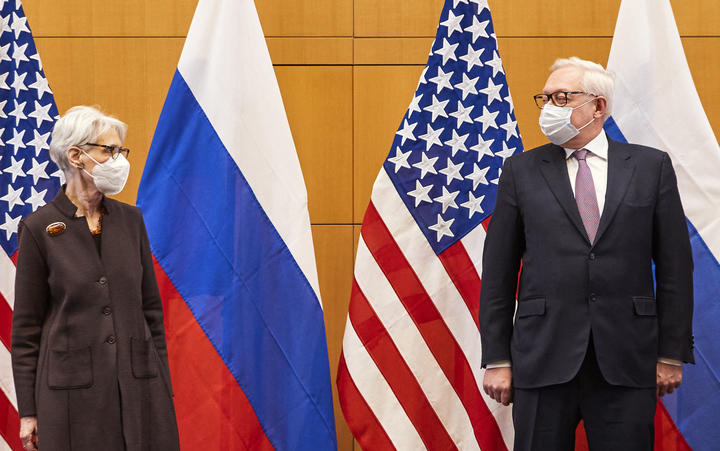 After a meeting that lasted for seven hours on Monday, both sides agreed to continue efforts to reduce tensions.

But there was no sign of a major breakthrough following the talks.

About 100,000 Russian troops are believed to be near the border with Ukraine, prompting fears of an incursion and warnings from the West.

The US has said there would be sanctions if Russia were to attack Ukraine.

Russia, meanwhile, has warned the US not to "underestimate the risks" involved in Moscow's confrontation with the West.

"We explained to our colleagues that we have no plans, no intentions to attack Ukraine," Russian deputy foreign minister Sergei Ryabkov told reporters following the meeting.

He said the Russians had told their US counterparts "that all measures for the combat training of troops and forces are carried out within our territory" and that there was "no reason to fear any escalation scenario in this regard".

US Deputy Secretary of State Wendy Sherman described the talks as "frank and forthright" discussions designed to encourage a better understanding of each side's security concerns.

Sherman said the US had pushed back on Russian proposals that were "non-starters" for the US government, including Russia's demand that Nato commit to never include Ukraine in the alliance.

"We will not allow anyone to slam closed Nato's open-door policy, which has always been central to the Nato alliance," she said.

According to Sherman, the US delegation told the Russians that any invasion would be met with "significant cost and consequences well beyond what they faced in 2014" when Russia annexed the peninsula of Crimea from Ukraine.

These measures could include sanctions against key financial institutions, export controls, "enhancements of Nato force posture on allied territory" and increased security assistance to Ukraine, she said.

Ryabkov said the talks had been "business-like and professional" but warned the US not to "underestimate the risks" of the tensions.

The Geneva talks are the first of several meetings between US, allied and Russian officials this week, which will also include a meeting at Nato headquarters in Brussels and at the permanent council of the Organisation for Security and Co-operation in Europe, which includes Russia.

Monday's meeting, however, took place without the participation of US European allies, including Ukraine, prompting reassurances from Sherman and other US officials that Ukraine, Europe and Nato would be included in any decisions.

Earlier on Monday, EU foreign policy chief Josep Borrell Fontelles said he believed a Russian invasion was still possible. "There are 100,000 Russian troops on the other side of the border," he said. "I suppose they haven't gone there to drink coffee!"

Borrell said he had been told nothing would be agreed without the EU's "strong co-operation, co-ordination and participation".

Russia has repeatedly denied it has any plans to launch a military operation in Ukraine. Last month, the Russian government published a series of demands including a commitment that Ukraine will never join Nato.