AUKUS and Australia–Indonesia relations: 2+2 clever by half

Amid the commentary on Australia’s handling of France over the decision to switch to nuclear-powered submarines, Canberra’s treatment of another close partner and the reaction that has caused have received relatively scant attention.

The Australian government’s dealings with Indonesia on the submarines and AUKUS was no less maladroit.

Foreign Minister Retno Marsudi’s carefully crafted communiqué on AUKUS and its headline first act was muted compared to Paris’s understandable fury at being so shamelessly gulled. On the surface, it simply called on Australia to keep to its commitments under the Nuclear Non-Proliferation Treaty and ASEAN’s Treaty of Amity and Cooperation and encouraged Canberra to settle differences ‘peacefully’ through dialogue and international law, specifically the UN Convention on the Law of the Sea. 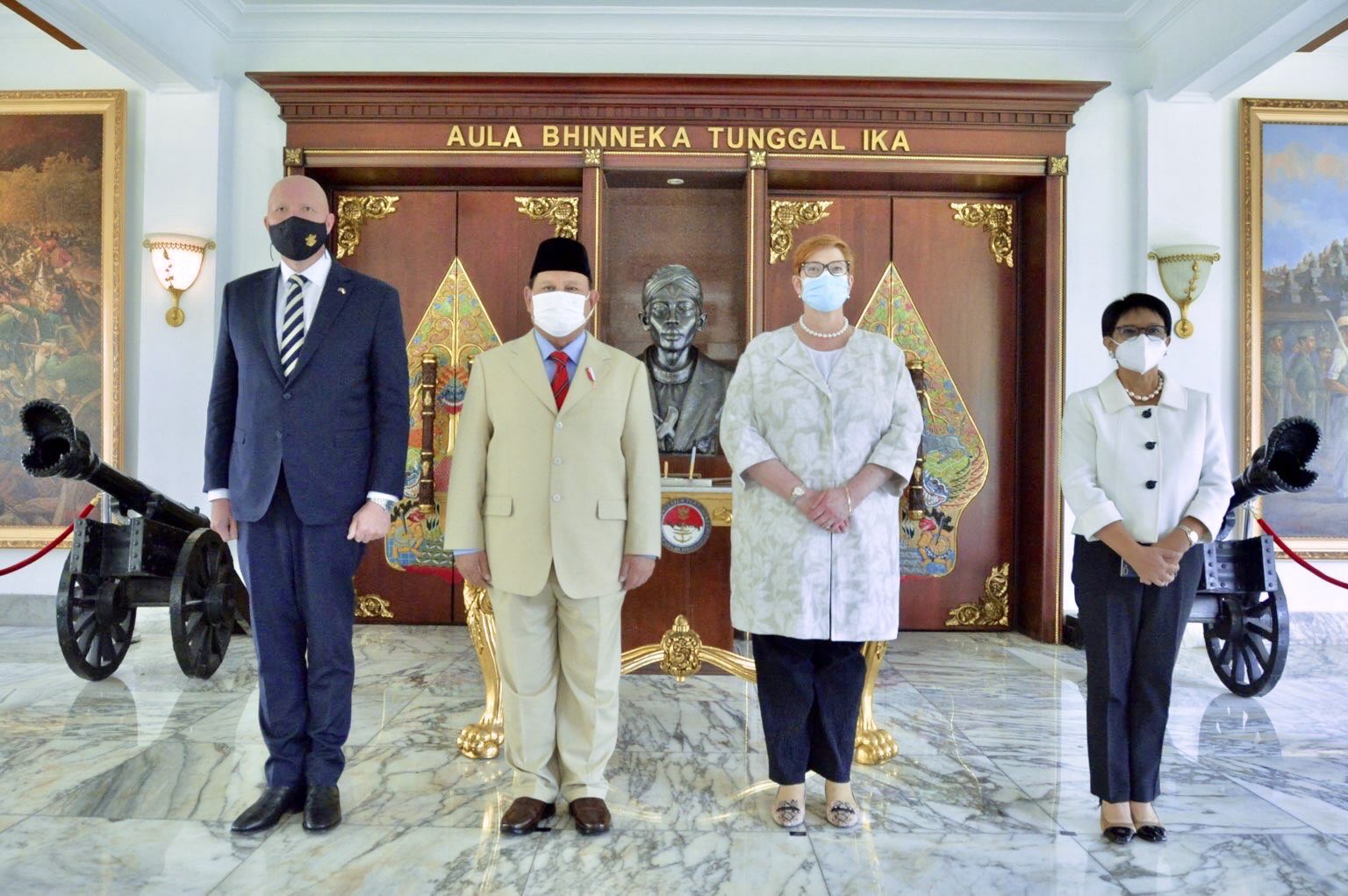 But Marsudi’s pointed use of adverbs like ‘deeply’ hint at more profound concerns, and the dynamics of Indonesian politics are likely to plunge them even deeper.

One doesn’t have to swallow the line of some observers in Jakarta that Southeast Asians are universally upset by Australia’s ‘arrogant’ actions on the grounds that buying such boats will imperil the region’s aspirations to being a zone of peace.

They aren’t. Some have welcomed AUKUS and what it brings, including Australia’s boats. Their fears about China lie behind this.

Even many Indonesians are unconvinced that signing up to the ASEAN peace treaty guarantees either amity or cooperation when Beijing is busy enforcing its absurd nine-dash-line pretensions to ownership of the ‘North Natuna Sea’.

Some have been quick to urge Indonesia to step up its military responsiveness to China’s latest incursion into its exclusive economic zone, which the government has done, albeit without any accompanying statement from Retno expressing concerns, deep or otherwise, about Beijing’s actions.

One Indonesian parliamentarian, a former major general, has even claimed that an ‘anti-communist’ group within Indonesia’s military was keen for Indonesia to join the US ‘bloc’ and transform AUKUS into ‘AUKUSI’.

That said, it’s true that many Indonesian commentators, like their government, want to put the emphasis on international law and ASEAN-centred diplomacy in dealing with Beijing. For them, AUKUS and Australia’s submarines are an affront to both.

Moreover, President Joko Widodo’s administration doesn’t see the need to pick sides—much as Australian governments used to argue until recently—especially when it sees material advantage in flirting with both.

The Australian government isn’t oblivious to this sentiment, or the need to play to it. Foreign Minister Marise Payne has recited her mantra that Australia wants to help towards the region’s peace and security under the wise helmsmanship of ASEAN.

But the government’s actions have made these words sound more hollow than ever. Sequencing the Jakarta-hosted 2+2 meeting just one week before the AUKUS announcement is a glaring example.

Whatever hints Australia’s ministers might have given their Indonesian counterparts, it’s clear that Jakarta was as blindsided as the French.

This is not to say that Canberra should have let the Widodo administration into the secret. Our comprehensive strategic partnership is way too short of being truly strategic for that.

But this not how to treat partners in a relationship that we sensibly want incrementally to grow more closely aligned, even if anything approaching a truly meaningful and influential strategic relationship is still little more than a pipe dream.

We could and should have done things differently, more respectfully and frankly—and held the talks after the AUKUS announcement.

Canberra could have told its partners in Jakarta some time beforehand that something was going to happen that would affect their interests, begged their understanding that this needed to be held close for the time being, reassured them that we’d taken full account of Indonesia’s position, and explained that we must brief our partners.

Of course, after the announcement the Indonesians may have expressed their discontent by abruptly postponing the talks. The optics would not have been ideal. But all it would have shown is that the two countries held different positions and that Australia at least showed Indonesia the respect of giving it some forewarning and the chance to discuss the matter as equals.

On the other hand, had the talks proceeded, we could have demonstrated plausibly that we’d listened attentively to what Indonesia was telling us and would behave accordingly. We could have allowed Jakarta to highlight how concerned it was that Australia keep to its obligations under the Nuclear Non-Proliferation Treaty and its stated adherence to ASEAN regional leadership and its Indo-Pacific vision. We could have politely and respectfully argued that deterring hegemonic behaviour that threatened ASEAN’s principles and the sovereignty of its members necessitated a credible deterrent, but that we of course shared the goal of sustainable peace and prosperity.

Instead, by carrying on blithely with the talks before the announcement, we’ve left the impression of duplicity and arrogance. Too many Indonesians have associated the first characteristic with us since East Timor’s independence, if not before. But arrogance is especially frowned upon in Indonesian culture and often associated with neo-colonial tendencies.

We’ve not only added superficial credence to the argument now raging in Jakarta that Australia has crawled away from ASEAN and back to its ethno-racial brethren and the pretensions of deputy sheriffdom. We’ve given more resonance to the arguments of those insisting that Australia is no less a threat to ASEAN states’ interests in keeping their region peaceful than China, notwithstanding that the AUKUS and Quad states haven’t claimed any disputed atoll as their own and turned it into an unsinkable aircraft carrier.

We’ve flared the preconception that Australia is cavalier about Indonesia’s desire that foreign submarines—especially ‘nuclear’ ones—don’t secretly ply waters it regards as its tanah air (homeland).

The dynamics of Jakarta’s politics and its structures of government risk deepening this impression. Indonesia’s system affords a significant role in international affairs to its legislature. Distinct from the executive in Indonesia’s presidential system, the parliament’s commission responsible for foreign and defence issues not only exercises actual powers but also serves as a bully pulpit to shape public opinion, often in the direction of nationalist populism.

Australia has often been a favourite target of this body’s more jingoistic members, and little could inspire them more than the prospect of their southern neighbour being up to its perceived usual tricks and treating Indonesia with contempt.

The commission’s members have acted true to form, with some urging the administration to confront Australia for threatening the region’s peace and taking measures that have ‘implications for the defence … or the sovereignty of our country’.

The commission’s censure will add to the negative perceptions of AUKUS and Australia’s military ambitions already in the public domain. Australia even seems to have engendered suspicions that it’s secretly planning to arm its submarines with nuclear weapons, regardless of our assurances to the contrary.

Our assurances risk carrying as much weight in such quarters, including in the commission, as our insistence that we have no designs on Papua, even though both are true.

In democratic Indonesia, administrations can ill afford to disregard such political posturing, and the administration’s messaging has subtly adjusted. After appearing before a closed commission hearing, Deputy Foreign Minister Mahendra Siregar reaffirmed that Indonesia was ‘worried’ that Australia’s nuclear submarine plans would destabilise the region by provoking an arms race, pointing the blame for such ‘disturbance’ more openly than Retno.

All this affirms that unless Australia starts investing as much strategy and trust in diplomacy as it does in military preparedness—if not in sheer dollar terms, then at least in skill, integrity and nous—we risk doing little to ‘shape’ our region besides helping a select few deter China from forcefully reshaping it.

It’s hard to be optimistic that the government will do so. Too often the political optics seem to be paramount. And in questions of national security, it has shown little evidence, despite modest boosts to the aid budget for Southeast Asia, that it holds its foreign ministry in the same regard as defence, whether as a source of advice or as a prop for its announcements.

The view seems to be that the domestic case for doing more to pursue our foreign and strategic interests is more marketable standing in front of impressive weapons or next to American presidents than behind culturally astute diplomatic tradecraft.

The government might well claim that with Indonesia, this approach works fine. It may assume that AUKUS will not lead to Jakarta repudiating our strategic partnership agreement, let alone rejecting the Bushmaster vehicles Australia has gifted it or recoil from the other small but welcome enhancements to the defence cooperation agreement both sides committed to during the talks.

By such superficial measures, it might well be right. We’ll manage our way out of any immediate tension, which Jakarta will wish to limit.

But as the past fortnight has underlined in very dark tones (especially in our relations with France), tin-eared diplomacy accrues costs, especially in disaffecting and even offending those we need most to influence.

For the time being, Australia and Indonesia disagree fundamentally over the relative utility of dialogue and alliance-based hard power in deterring a would-be hegemon and preserving sovereignty, and about how much of the latter is necessary if the former can have any power of persuasion.

We should expect this disagreement to persist for the foreseeable future. The Widodo administration’s successor will likely think the same way.

That’s fine. We can disagree.

We should certainly not be dissuaded from taking measures we consider vital to our national security just because Jakarta holds a profoundly different perspective. (Whether the course Canberra has chosen is the right one is an entirely different debate.)

But if one of our strategic objectives is a relationship with Indonesia that has matured beyond the transactional into a genuine partnership built on mutual trust and respect, we will need to relearn how to pursue that more adroitly.

In time, we could help nudge Jakarta at least into shifting closer to those of its ASEAN partners less ambivalent about China’s real threat and how realistically to address it, while lending more credence to our claims in Washington that we are attuned to, and influential in, our region.

This will take more than just scheduling meetings better, though that would help.