The Ardern coalition government has chosen an awkward moment internationally to release its first big picture view on world affairs. The primary purpose of its 2018 Strategic Defence Policy (SDP) Statement is to demonstrate why NZ requires a suite of identified military capabilities. Although the envisaged costs are considerable, the statement presents a solid case for equipping NZ first and foremost for credible stewardship and protection of its ‘near abroad,’ from Antarctica to the Equator. The presentation is clear and concise. 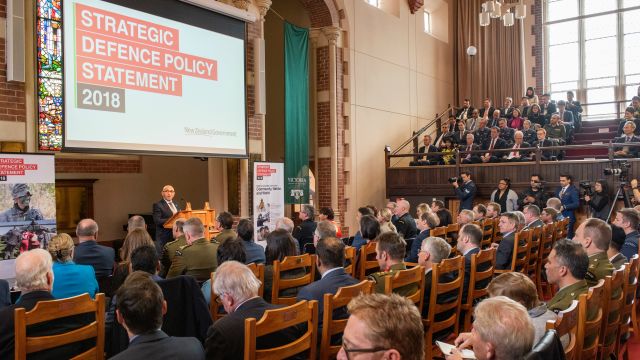 In addressing the wider context of NZ interests the document stresses the crucial importance of an international rules based order (in its 39 pages there are 33 such references) and the responsibility of the New Zealand Defence Force and security/intelligence community to strive to ensure the integrity of that order.  Concern for rules-based order has of course traditionally been a first care of foreign policy advisers and the new statement gives a nod to NZ’s independent foreign policy.  But it reflects more significantly the way in which national security agencies of New Zealand’s traditional partners now prioritise oversight of rules-based order as justification for their own international relations primacy, and for enhanced military and security capability to confront perceived threats. Is NZ now on the same pathway?
​Pretty big questions hang in the air over the document. Its criticism of China exceeds previous NZ pronouncements.  It is important of course to avoid rose-tinted spectacles when observing China, which is after all intensely realistic about its national interest. It is equally important to temper reactions to alarmist predictions about China, whether domestic or foreign. There is a question about how wise or necessary NZ’s unprecedented expressions of disapproval about China are at the precise moment when President Trump is revealing what “Making America Great Again” actually entails for the rest of the world.

The new NZ statement does not traverse or anticipate the trade wars which the US President has seen fit to trigger, nor his deep antagonism towards international institutions from the UN to NATO, from WTO to the Human Rights Council and much in between; nor the policy shifts in the Middle East which are significantly altering the goal posts in a region where the 2018 NZ SDP nonetheless anticipates enduring NZ involvements.  Prevailing US actions and attitudes directly affect strategic stability and international rules-based behaviour.   It is not excessive to suggest that the rule of law is presently endangered as much by the US as it is by China.  The Strategic Defence Policy Statement does not insinuate that conclusion.

Uncertainty in the world created both by BREXIT in Europe, and by the Trump Presidency, occurs too against a background of wider structural change globally, as a consequence of the successful advances by China and East Asia which substantially influence NZ’s international political, trade and economic interests. It is notable that the SDP urges fortifying key traditional security partnerships (it singles out NATO, the EU and Five Eyes) as central to NZ’s adjustment to this structural change.  It does not propose leveraging the national asset of a small professional defence force to develop and deepen non-traditional  operational partnerships in the Asia-Pacific, and so complement evolving NZ political, economic and trade interests.

In the same way, the 2018 SDP suggests the NZ strategic response to an endangered rules-based international system must be to fortify ‘western’ military defence affiliations, and consolidate comfort within a smaller exclusive intelligence club of native English speakers. This sounds a bit like “circling of the English-speaking wagons” to confront the rest. Is that really what modern NZ interests demand or prefer? It is relevant to recall what the founding director of the CIA, Allen Dulles, avowed many years back, that “intelligence is the servant not the master of foreign policy.” That precept remains valid.

The 2018 NZ SDP appears to anticipate a silver lining. President Trump will after all not be around forever.  One day there will be return to ‘the way things used to be’.  This ignores the extent to which populist and disruptive influences inside the US have been so stirred as to alter the American sense of liberal internationalism. The fact is big and small countries alike cannot and will not simply stand still and stick with habitual routines and prescriptions, in anticipation of an eventual American reversion post-Trump. The recent announcement of a EU-Japan Free Trade Agreement, unparalleled in scope, proves that point.