The Royal Australian Navy’s 808SQN based at HMAS Albatross near Nowra will soon replace its Airbus MRH 90 helicopters with a new utility helicopter.

As forecast in the Government’s 2020 Force Structure Plan and accompanying Defence Strategic Update released on July 1, the new utility helicopter will be acquired in the 2025 timeframe, although this may need to be brought forward in order to maximise commonality with existing capabilities.

The Force Structure Plan offers little detail, saying only that the RAN will, ‘Expand and rationalise the support and logistics helicopter fleet consistent with the expectations for larger naval operations.’ An accompanying timeline chart shows a project for a ‘Logistics Helicopter’ running from 2025 to 2031, and is valued at $1bn to $1.5bn.

ADBR understands the new capability will replace the small fleet of six MRH 90s taken on by Navy to replace its Westland Sea King Mk50/A in 2011 under Project AIR 9000 Phase 6. Industry sources claim the small fleet of MRH 90 helicopters – despite being identical to the 41 machines operated by the Australian Army – is difficult to sustain, especially when embarked at sea, and that these machines will be absorbed by Army.

After suffering multiple delays with its own AIR 9000 Phases 2/4 project milestones since the MRH 90 was introduced in 2006, Army has had improved sustainment success with and availability of its MRH 90s in recent years due to having a greater mass of machines and a joint industry and uniformed maintenance team in Townsville, north Queensland.

But none of the 47 MRH 90s in Army and Navy service are marinised, so sustained operations as sea from the RAN’s Canberra class LHDs and other vessels require an inordinate amount of preventative maintenance and washing after each flight to mitigate corrosion.

Instead, sources tell ADBR that the RAN is instead considering a new helicopter type with greater commonality to its Sikorsky MH-60R ‘Romeo’ Seahawk combat helicopter, of which it has 24 in service. This really leaves just two possibilities – the MH-60S ‘Sierra’ Nighthawk, or additional MH-60Rs.

On paper, the MH-60S makes more sense from a utility point of view, as it has a larger cab based on the Black Hawk airframe with double doors on both sides of the cab, seating for up to 12 passengers, and more internal space for cargo. The MH-60S also shares its cockpit, engines, and dynamic components with the MH-60R, and crews can be dual-qualified.

But with the US Navy having fulfilled its requirement for 275 aircraft and another eight aircraft for Thailand by 2016, the MH-60S is no longer in production, and it is unclear if production could be restarted on the existing line.

The missionised MH-60R has a much smaller cab than the Sierra, with space for just a couple of seats. The dipping sonar, sonar buoy tubes, and sensor operator station can be removed to increase cargo and seating area, but this is a time-consuming and difficult task to perform at sea. Despite carrying all of the above equipment, RAN Romeos currently conduct logistics operations when embarked using an external cargo hook.

And while the US Navy has fulfilled its requirement for 291 MH-60Rs and has completed orders for South Korea and Denmark, the aircraft remains in low-rate production for orders from India and Saudi Arabia. 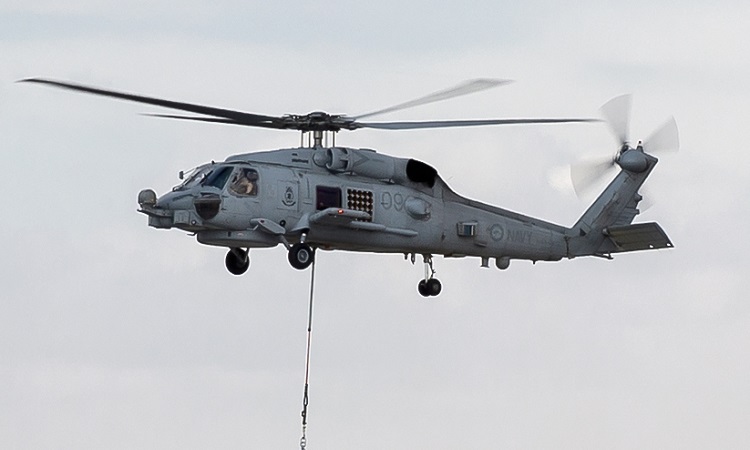 With the RAN’s surface combatant fleet scheduled to grow over the next two decades as the Arafura class OPVs are introduced and the Hunter class frigates begin to enter service, it is likely more than 24 combat helicopters will be required to fulfill the RAN’s combat helicopter and associated training requirement.

For its fleet of 24 Romeos, the RAN bases its current rate of effort on eight 816SQN aircraft being embarked at sea at any one time, eight being used for training with 725SQN, and eight in maintenance or being prepared for deployment.

The Romeo and Sierra are built by Lockheed Martin subsidiary Sikorsky at Hartford in Connecticut, and are then flown to Owego in neighbouring New York state for the integration of their mission and combat systems.