In a central Auckland suburb, anti-vaccination proponents are targeting new parents. Just down the motorway, parents are caring for their critically ill children with measles. How can this be happening in the same country, let alone the same city? Michelle Duff reports.

In a building down a leafy street in central Auckland, expectant parents attend midwife appointments, browse through organic cotton onesies, and sign up for mum and baby yoga.

They can sign up for antenatal classes, where they learn all about baby care. And they can pay $140 to take a course about "informed consent" and "natural immunity," run by an organisation called Authentic Resistance.

On the surface, the course purports to be about educating parents to make decisions about their child's health. 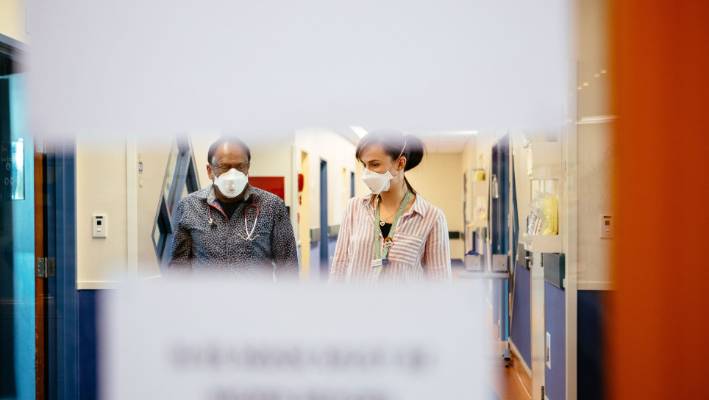 Middlemore's Kidz First children's hospital in South Auckland has established a dedicated measles ward to contend with the number of sick kids they are admitting.

But an investigation by Stuff has found the two-person travelling roadshow is a vehicle for the spread of myths around vaccination safety that specifically target new parents.

As New Zealand fights the biggest epidemic of measles in more than two decades, public health experts are questioning why the Ministry of Health is not doing more to stop the spread of bogus information to the groups that are most at risk – like new and expecting parents.

"Parents are being given a load of mumbo jumbo, and it's actually pro-disease."

From MAMA Maternity, a hub to more than 20 midwives where the Authentic Resistance courses will be run in November, it's about 16 kilometres down the Southwestern motorway to Middlemore's Kidz First hospital.

There, a "measles ward" has been established to isolate the three kids a day who are being admitted to hospital with the vaccine-preventable illness. "We can't afford this in New Zealand, it's outrageous. It should not be happening," Immunisation Advisory Centre (IMAC) director Nikki Turner told Stuff when the extent of hospitalisations was revealed in late August. 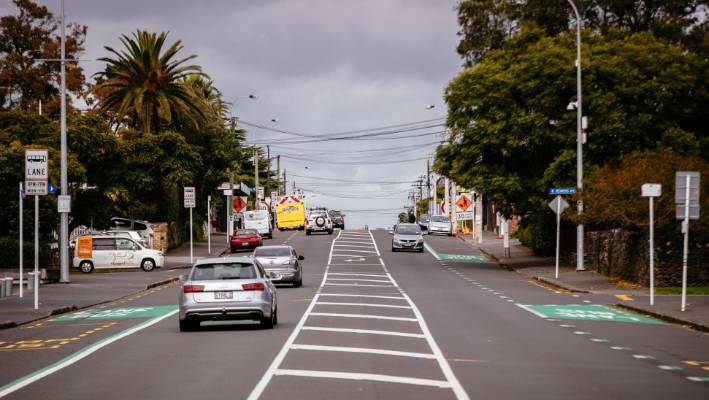 In one suburb, parents sign up for classes on "natural immunity." In another, babies are hospitalised with vaccine-preventable illness. Pictured is Sandringham Rd.

Institute of Environmental Science and Research (ESR) data shows of the 270 confirmed cases of measles in under 9-year-olds, 90 per cent had received no vaccinations.

The outbreak comes as Stuff has found district health boards nationwide have been pleading with the ministry to help with dropping immunisation rates and increasing anti-vaccination sentiment in pockets of the community since at least 2016.

Frontline health staff are being challenged by parents who have increasing concerns over vaccines, while being asked to debunk pseudo-science and conspiracy theories printed off the internet, documents show.

Meanwhile, vaccination rates nationally have fallen to their lowest since 2016. 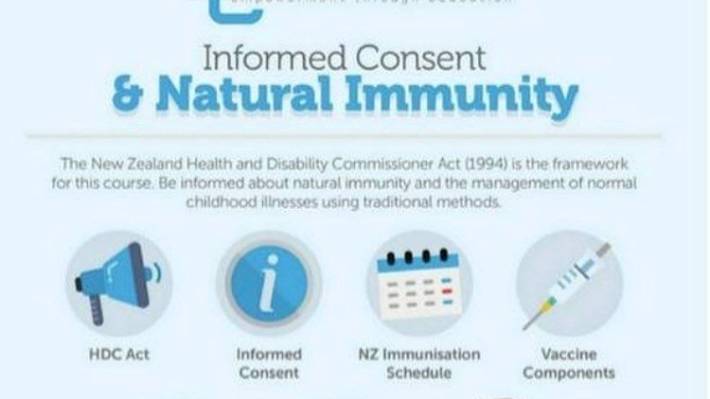 Data analysed in a Stuff project, The Parent Trap, shows rates of immunisation vary hugely round the country, including in some high-income areas of Christchurch, the Coromandel, Waiheke Island, and Titirangi – where an increasing number of parents are choosing not to vaccinate their children.

Meanwhile the equity gap for Māori babies is the worst it has been for five years, with coverage for Māori 6 percentage points lower than for the total population.

The organisers of Authentic Resistance, former nurses and antenatal educators Erin Hudson and Sheena Roberts, say they are not anti-vaccination but "pro-choice", and do not give advice around vaccinations.

One of the registration questions for their course is "Informed Consent and Natural Immunity" is: "When did you first start to question vaccines?"

In a testimonial on the Authentic Resistance website, a new mother describes being uncertain about vaccines and having her concerns validated by Hudson and Roberts: "Initially, my partner and I went into the course with a basic knowledge of vaccines but were very much still on the fence; we had thought we would choose a delayed vaccine schedule starting at 3 months, and planned to skip some altogether," it reads.

"However, that all changed following our attendance; it was just so reassuring to meet others in our exact position and throughout the 4 weeks, my initial hesitation around vaccines were reinforced by the skilled facilitators."

In an interview with Raglan Radio in 2017, Hudson says the course covers the right to refuse vaccines, historic concerns, and homeopathic remedies. She says with good nutrition, the body can look after itself.

Hudson is a former chairperson for anti-vaccination lobby group Warnings About Vaccination Expectations (WAVES) NZ, formerly the Immunisation Awareness Society. She was quoted as their spokesperson in an October 2018 story about an anti-vaccination billboard placed on Auckland's Southern motorway, which said "If you knew the ingredients in a vaccine, would you RISK it?"

Hudson did not answer phone calls, but provided an emailed response to questions from Stuff. Asked about her involvement with WAVES, Hudson said she had never been their designated spokesperson. "That has been a media label." She said she was no longer involved with WAVES and Authentic Resistance had nothing to do with the group.

Asked why she felt it important to run the courses, she said: "Informed consent is poorly managed around the vaccination discussion. Many doctors do NOT do due diligence in this regard. Several medical practices harass and coerce the parent into making a decision they are not comfortable with."

She did not respond to further questions asking for the names of these doctors or their practices, or the difference between pro-choice and anti-vaccination.

More than 20 midwives work out of MAMA Maternity, a popular facility in Sandringham which also features a shop and hosts antenatal and postnatal classes. Measles warning signs are plastered all over Middlemore Hospital, as doctors fight to prevent the spread of the highly-contagious illness.

Company director Brenda Hinton is also the spokeswoman for the Maternity Services Consumer Council (MSCC), a "consumer-based" organisation which advocates for choice in maternity care and opposes the medicalisation of childbirth.

Hinton said questions about Authentic Resistance needed to be directed to it. "They are completely independent of MAMA and have simply hired one of our meeting rooms for their seminar."

She said she had no concerns about the course. Asked about MAMA and the MSCC's stance on vaccinations, she said: "No stance taken by either ... both organisations support and promote the legal right to informed choice regarding any medication or medical procedure."

The midwives who work at MAMA are self-employed, renting rooms in the facility.

The Midwifery Council code of conduct requires midwives to provide impartial, honest and accurate information in relation to midwifery care, including immunisation.

College of Midwives Midwifery Adviser Jacqui Anderson says the college supports immunisation as a public health strategy. She encourages parents who have not had this experience to contact the college in confidence.

Petousis-Harris says language like "informed choice" and "pro-choice" is more often than not code for "anti-science". She considers Authentic Resistance's advertising to new parents – which research has shown are one of the most vulnerable groups – is misleading.

"What 'pro-choice' means in this context is you should look at what they would say is the evidence against, and the evidence for. What that actually means is look at anti-vaccination material, which is not the same as looking at scientific evidence.

"They frame themselves this way because they don't want to be known as anti-vaccine."

Claims that vaccine-preventable disease can be avoided or treated by natural remedies is magical thinking, Petousis-Harris says. "A lot of people are attracted to a natural approach to health and wellbeing, which is what this passes itself off as. But the truth is none of these diseases are easily treatable, especially not by homeopathy."

Even as the country is hit with the most devastating outbreak in more than two decades, increasing numbers of parents – including in the richest suburbs – are not vaccinating their children.

The Ministry of Health says the reasons for dropping vaccine rates are complex, and poverty and access remain top concerns alongside vaccine hesitancy.

But internal documents show district health boards insist they are "doing their best" to reach impoverished communities and suggest the difference has been in attitudes.

The latest figures, from June 2019, show 10-12 per cent of parents are now declining vaccines for their eight-month-olds in Bay of Plenty and Northland. In Gisborne and the central North Island, around one in 10 parents are declining.

In the West Coast, home to the religious community of Gloriavale, 20 per cent of parents refused vaccines in the three months to June. University of Auckland vaccinologist Dr Helen Petousis-Harris. "It's mumbo-jumbo, and it's magical thinking."

"Factors include negative social media forum-based concerns for safety that engender suspicion and exchange of emotional facts; Western Bay of Plenty in particular has a tradition of a 'natural' drug free community ... and this persists with immunisation," the Bay of Plenty district health board wrote in answer to the health select committee's questions about high rates of refusal in its 2018 annual review.

Those families whose views were entrenched were "difficult to engage with," it wrote. Instead, it was important to focus on highlighting the positive benefits of vaccines to those who could be reached, like new parents through their midwives, it said.

Those who have worked in the area for years, like IMAC's Nikki Turner, say it is a complicated picture. Like many other health issues, vaccination rates are often worse in poorer areas, where families struggle to access health services.

But that does not explain why rates have been dropping in plenty of high-income suburbs, too, or why there are relatively high rates among Pasifika babies and children.

For Māori families, reasons for not vaccinating children can be related to mistrust of the state. In Gisborne, parents who declined vaccination for their eight-month-olds doubled over the course of 2017 alone.

Asked why, a Tairawhiti District Health Board immunisation steering group was told there was "anecdotal evidence that grandparents [and] dads are not wanting to 'put poison in their tamariki/mokopuna' ... they don't feel confident in vaccine safety."

Other parents were delaying, preferring to start vaccinating when their babies were older. Outreach nurses were being "challenged" on vaccines, particularly after the death of two babies in Samoa.

These were unrelated to the MMR vaccine, but any safety concerns were "fodder" for anti-vax sentiment, the report said. "More young mums are using social media."

While disinformation hits poor areas the hardest – where communities are already struggling with poor coverage – there have also been drops in the richest areas.

The Taranaki District Health Board found parents in its region who actively refused all vaccines were more likely to be Pākehā, well off and well educated, placing more vulnerable communities at risk.

"The data suggests that these parents are likely to be on high incomes, be well educated, and have no structural barriers, such as access to health services or lack of transport, that might otherwise prevent them from vaccinating," reads a 2018 report into parents who refuse vaccines.

Ministry of Health director of public health Dr Caroline McElnay says the recent decrease in vaccination rates is a high priority. It has established a formal project team to address this, with a particular emphasis on Māori families.

It's harder to reach parents who are actively declining vaccinations than it is to target those who are unvaccinated for other reasons, such as access, McElnay says. "The most effective way to increase immunisation rates is therefore to focus on ensuring that those who are willing to be immunised are able to."

WHAT IS VACCINE HESITANCY?

This year, the World Health Organisation identified "vaccine hesitancy" as one of the top 10 threats to global health. This is the reluctance or refusal to vaccinate, despite availability.

In the current measles outbreak, more than 600 cases have been reported. About 40 per cent of those suffering from the highly-contagious disease have been admitted to hospital.

This surpasses the last outbreak of this magnitude, in 2011. The largest count before that was in 1997, when there were 1984 cases.