The Australian government often describes Australia and New Zealand as ‘natural allies’. But Prime Minister Scott Morrison’s announcement of the AUKUS security partnership with the United States and the United Kingdom on 16 September—which he described as ‘a forever partnership for a new time between the oldest and most trusted of friends’—raises questions about the changing dynamics of Australia’s natural alliance.

Morrison called AUKUS ‘the single greatest initiative … since the ANZUS alliance itself’ for achieving the ‘stability and security of our region’. It is perhaps no coincidence that the announcement was made only weeks after the 70th anniversary of the 1951 ANZUS Treaty. On that occasion, Morrison said ANZUS was ‘the foundation stone of Australia’s national security and a key pillar for peace and stability in our Indo-Pacific region’.

But AUKUS doesn’t include New Zealand, which remains a treaty ally of Australia under ANZUS (the US having rescinded its security guarantee to New Zealand in 1986 after a dispute about nuclear vessels visiting New Zealand). 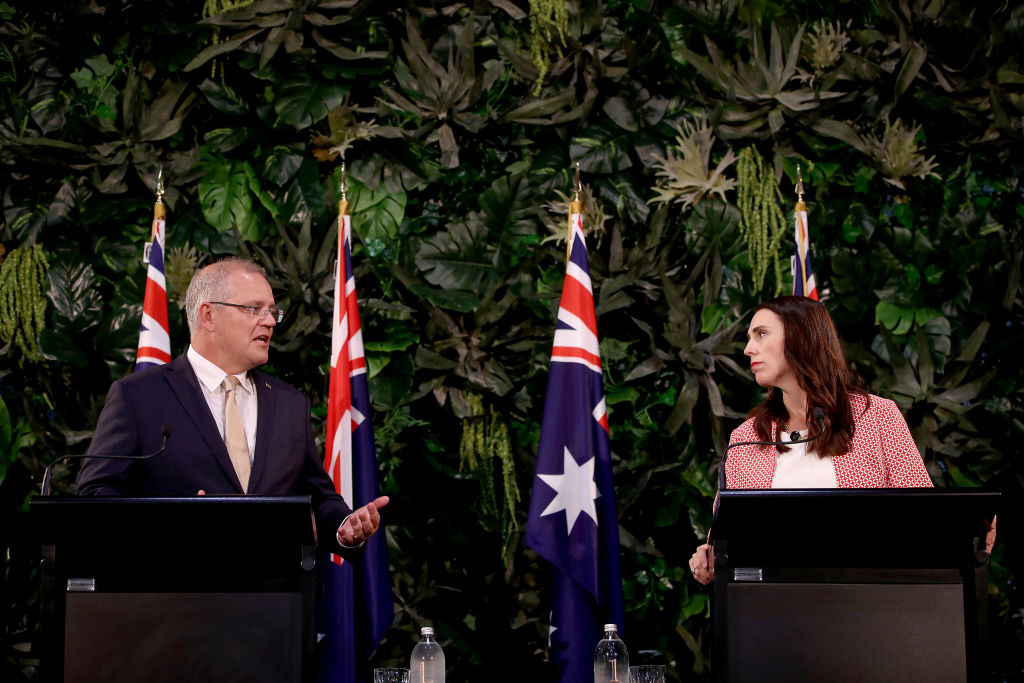 The new trilateral agreement will deepen defence and security integration between Australia, the US and the UK, strategically aligning Australia even more closely with the US. This will have consequences for Australia’s relationship with its only other formal treaty ally, New Zealand.

Much attention has focused on the fact that nuclear-powered vessels are banned from New Zealand waters. And Prime Minister Jacinda Ardern has confirmed that any nuclear-powered submarines Australia acquires under AUKUS will not be allowed into New Zealand’s territorial waters. When discussing the partnership, the head of Australia’s Defence Department, Greg Moriarty, said that Canberra is ‘conscious of and respectful towards New Zealand’s approach to nuclear-armed vessels’. Even so, for Australia’s natural ally not to permit the submarines, which (if or when they eventuate) will form a major part of Australia’s defence capability, into its territorial waters may create later tensions.

Ardern has clarified that, while New Zealand wasn’t invited to join the partnership, she wouldn’t have expected to be asked. Notably, she was the first world leader Morrison informed before the announcement, although not before the decision. The lack of communication has generated frustration in New Zealand, with opposition leader Judith Collins expressing her disappointment that New Zealand wasn’t involved in the discussions.

Ardern has taken a more neutral approach, making clear that New Zealand ‘welcomes the increased engagement of the UK and US in the region’ and reiterating that ‘our collective objective needs to be the delivery of peace and stability and the preservation of the international rules based system’. She also insisted that AUKUS ‘in no way changes our security and intelligence ties’ with Australia, the US and the UK.

But AUKUS does underscore two emerging dynamics in the trans-Tasman alliance. The first is that, after several decades trying to articulate its role in Asia and the Pacific, Australia has made explicit its identification with the ‘Anglosphere’. In contrast, while an ‘original’ Anglosphere member, New Zealand now presents itself as ‘first and foremost a nation of the Pacific’ that ‘views foreign policy developments through the lens of what is in the best interest of the region’.

This divergence reflects a growing degree of ambiguity between the two allies about whether they’re part of the Pacific islands region. Although Canberra likely hopes that Wellington will help smooth over concerns about AUKUS with Pacific island nations, it’s unclear how long New Zealand will be willing to act as Australia’s ‘good cop’ in the region.

The second issue is that the defence alliance between Australia and New Zealand, considered the closest in our region, is already changing in practical ways. New Zealand already struggles to maintain interoperability with Australia’s defence capabilities. AUKUS, which seeks to deepen interoperability across many areas of defence and security technology, including artificial intelligence, cyber, quantum, underwater systems and long-range strike capabilities, may widen the gap with New Zealand even further.

Wellington may also find that Canberra’s expectations of what burdens its junior alliance partner will share, in a material as well as a soft-power sense, may actually increase if New Zealand is to demonstrate its contribution to the alliance. As concerns about China’s rise and influence in the Indo-Pacific rise and Washington prioritises renewing and strengthening its alliances, the demands that AUKUS places on Australia could also shrink the bureaucratic bandwidth that Canberra can grant to Wellington.

These dynamics raise questions about the future of the Australia–New Zealand alliance, including the sustainability of New Zealand’s perceived free-riding on Australian defence spending and the two states’ roles in their immediate region, the Pacific islands. The allies have overcome major shocks before—such as the collapse of ANZUS between the US and New Zealand—but as strategic competition gains pace in the Indo-Pacific the presumed naturalness of their alliance is likely to be tested.