Ardern on NZ being left out of new AUKUS security pact 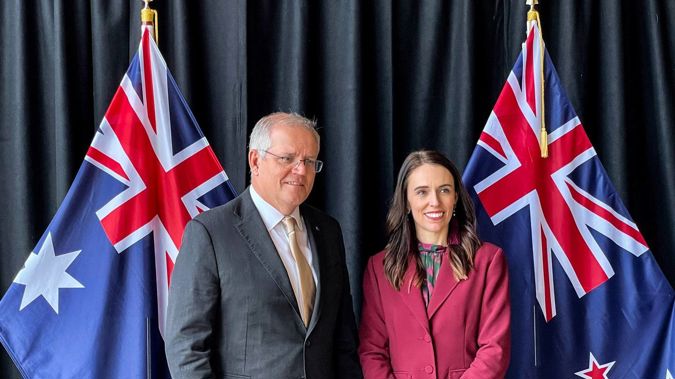 New Zealand has been left out of the new tripartite security pact among traditional friends, which is aimed at focusing efforts to respond to China's rapid military expansion in the Asia Pacific.

The first initiative of the pact, AUKUS, will be for the US and UK to supply Australia with technology to acquire nuclear-powered submarines.

New Zealand's position in relation to the prohibition of nuclear-powered vessels in our waters remains unchanged, Ardern said.

"Australia's arrangement with the US and the UK is primarily around technology and defence hardwear, with the centrepiece being the purchase of nuclear submarines by Australia.

"This arrangement in no way changes our security and intelligence ties with these three countries, as well as Canada."

She said New Zealand was first and foremost a nation of the Pacific and it viewed foreign policy developments through the lens of what was in the best interest of the region.

"We welcome the increased engagement of the UK and US in the region and reiterate our collective objective needs to be the delivery of peace and stability and the preservation of the international rules-based system."

The pact, which was announced this morning will be signed in New York next week by Scott Morrison, Joe Biden and Boris Johnson at the United Nations' leaders' week.

Ardern will not be attending because of the Covid-19 outbreak. She has been asked for comment on the new pact.

Australia and the United States are already close allies through the 70-year Anzus pact from which New Zealand was suspended in 1985 over its policy against nuclear-powered and armed ships.

The US, UK and Australia, plus New Zealand and Canada, are also part of the Five Eyes intelligence alliance and the five countries have been widening their areas of co-operation.

But New Zealand attracted a lot of criticism in April when Foreign Minister Nanaia Mahuta told reporters that New Zealand did not want to rely on Five Eyes for criticising China in joint statements.

Canada has been left out of the new pact but it is in the middle of an election campaign and its views are not yet known.

Australia has already embarked on a massive upgrade plan of its defence capabilities with a possible conflict with China in mind. It is holding discussion with the United States to establish its own missile-building industry using US technology.

Britain is expanding its military presence globally as part of its post-Brexit plans and the aircraft carrier Queen Elizabeth II is on its maiden voyage in Asia.

"We have always seen the world through a similar lens."

He said it was "a partnership that seeks to engage, not to exclude. To contribute, not take. And to enable and empower, not to control or coerce."

He also said AUKUS would enhance Australia's contribution to its growing network of partnerships in the Indo-Pacific region: "Anzus, our Asean friends, our bilateral strategic partners, the Quad, Five Eyes countries and, of course, our dear Pacific family".

The joint statement by Morrison, Biden and Johnson announcing the new pact sets a timeframe of 18 months to deliver technology to Australia for nuclear-powered submarines.

"Today, we embark on a trilateral effort of 18 months to seek an optimal pathway to deliver this capability. We will leverage expertise from the United States and the United Kingdom, building on the two countries' submarine programmes to bring an Australian capability into service at the earliest achievable date."

The statement also suggests that its key focus will be upgrade in capabilities.

"Recognising our deep defence ties, built over decades, today we also embark on further trilateral collaboration under AUKUS to enhance our joint capabilities and interoperability.

The pact does not mention China by name but it suggests that it wants to work with other partners with a commitment to the rules-based order in the Indo-Pacific, which is commonly used language in denouncing aggression by China.

"As leaders of Australia, the United Kingdom, and the United States, guided by our enduring ideals and shared commitment to the international rules-based order, we resolve to deepen diplomatic, security, and defense co-operation in the Indo-Pacific region, including by working with partners, to meet the challenges of the twenty-first century.