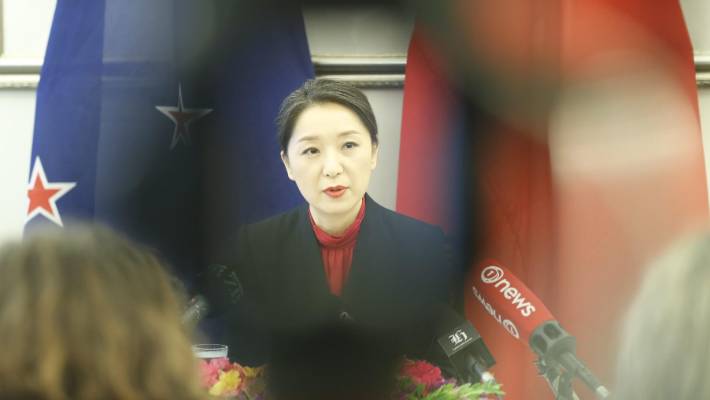 China's ambassador to New Zealand has heaped pressure on the government to open its borders in the wake of the novel coronavirus, stating she would protect "the interests" of Chinese students.

In a press conference in Wellington on Tuesday, ambassador Wu Xi downplayed the risk of the novel coronavirus outbreak in China, which she described as "generally under control" thanks to the "miracle" mobilisation of the Chinese state.

However, coronavirus cases have continued to rise with more than 70,000 reported in mainland China, where it has killed more than 1,700 people. More than 25 countries have reported cases, including five that have reported deaths.

Xi has said New Zealand's ban on foreign nationals entering the country from mainland China, renewed over the weekend, should never had been imposed.

She said it defied World Health Organisation advice for countries not to impose trade and travel restrictions, and was inconsistently harsh compared with New Zealand's response to previous outbreaks, such as Sars.

"With a lesser risk, why should tough measures be imposed in this case?

She also said she was speaking with the New Zealand Government about options for the thousands of Chinese university student who were unable to return to New Zealand to begin study.

Some of the Chinese students already in New Zealand had reported experiencing discrimination and xenophobia linked to inaccurate information circulating in here, he said.

"It is the embassy's duty to safeguard the legitimate interests of those Chinese students in New Zealand.

"We have been talking to various universities, schools and government departments and reflecting concerns from the students and asking New Zealand society to make proper arrangements."

Asked whether the ongoing restrictions were hurting the relationship between the two countries, Xi said it was already having a negative impact on trade and education.

"We have already seen an impact on bilateral cooperation.

"I hope this impact will be short term rather than medium term or long term."

China has criticised other countries including Australia and the United States, that, like New Zealand, have imposed restrictions on foreign travellers coming from or through mainland China.

During the press conference, Xi played several videos extolling the effectiveness of China's response to the virus, which has come under growing criticism abroad.

Throughout, XI repeatedly praised the "outstanding leadership" of Chinese president Xi Jinping in responding to the outbreak.

The New Zealand Ministry of Health has repeatedly said the government's approach to restricting travel is consistent with WHO guidelines.

On Monday, ministry director-general of health, Dr Ashley Bloomfield, said discussions were ongoing about making an exception that would allow Chinese students to return to New Zealand to resume study.

No novel coronavirus cases have been reported yet in New Zealand, although the Ministry of Health continues to predict that the virus will likely reach our shores.

Meanwhile at least 11 New Zealanders remain trapped in quarantine on the Diamond Princess cruise-ship off the coast of Japan awaiting evacuation, as the number onboard infected with the virus rises to 454.

On Monday, Australia announced it would evacuate the more than 200 Australians, as well as the New Zealanders, who are on board the Diamond Princess.

The New Zealand Ministry of Health has confirmed any New Zealanders returning home from the Diamond Princess would undergo "supervised isolation" for 14 days, similar to those who have been isolated at Whangaparaoa Military Camp since they were evacuated from Wuhan, China, nearly two weeks ago.

Two New Zealanders who were on board have already been hospitalised after contracting the virus and remain in stable condition in Yokohama, Japan.

On Monday afternoon, the Japanese Ministry of Health said it had uncovered a further 99 cases of infection on board the cruise-ship, including 70 that were carrying the virus but did not display any symptoms.

Fuck off, if I have my way the restrictions would be for at least another month or two... and if virus outbreak happened here in New Zealand your Communist Party would have had instant travel bans and done even more... Stop trying to interfere with how we run our country... the safety of our people comes first before you pathetic excuses.

So fuck off with your Communist BS.